Why Does My Guinea Pig Lick? (Me, Each Other, Cage & More)

We will earn a commission on purchases through the links mentioned here. This in no way affects our recommendations and they are based on research. Read more
You must have noticed your guinea pigs licking themselves on a regular basis, raising a few questions in your mind, such as: why do guinea pigs lick everything, and is it a cause for concern? I conducted some research into the subject, and the following is what I discovered.It is believed that guinea pigs lick themselves for three main reasons: grooming, bonding, and hierarchical organization. Guinea pigs groom themselves by licking the fur on their bodies. Furthermore, they establish their social harmony by licking the dominant guinea pig when the subordinate guinea pig is in the wrong position. Guinea pigs also demonstrate their affection for their owners by licking their faces.

Normally, guinea pigs lick themselves in an attempt to keep themselves clean. In addition to this, grooming is performed for a variety of other reasons. And this action performed by guinea pigs is not beneficial, particularly when it comes to grooming. It is used by them to express their feelings for one another and to communicate socially with one another.

Guinea pigs lick themselves excessively when they are bored or have a hidden illness. It primarily occurs when guinea pigs concentrate all of their licking efforts on a single spot, and as a result of their constant grooming, their fur becomes damp and matted.

Guinea pigs that are not sufficiently stimulated will exhibit negative behaviors, such as excessive licking at a single location, as a result of their lack of stimulation. Because the fur is always wet, it has the potential to cause bacterial skin disease. Aside from parasitic or fungal infections, excessive licking can also result in skin irritation.

Before you continue reading, here are some of our most popular books that are extremely well-written and offer excellent value. You don’t want to miss out on this opportunity!

Guinea Pig Diet Plan: A Complete Guide To What Your Guinea Pigs Can Eat

Do guinea pigs lick themselves?

Guinea pigs require to clean themselves, and they do so by licking. Though to be clean is not the only cause guinea pigs lick for, there are more other reasons for it. According to research, guinea pigs are affectionate animals who enjoy spending time with their companions. As a result, they do groom each other on occasion. For them, it serves as a means of communication as well.

Furthermore, because guinea pigs are extremely sociable animals, if they are kept alone, they may become lonely and depressed.

Guinea pigs also show affection by grooming themselves, which includes licking, gentle pushing, and nibbling. Guinea pigs will groom their ears and face by licking their paws, and this mechanism will also assist them in grooming those hard-to-reach areas.

They may occasionally enlist the assistance of their partners to groom them in these troublesome areas. It will reveal whether or not they have strong bonds and how well they are getting along as a couple. They might also beg you to pet and groom them, depending on how much time you have with them. 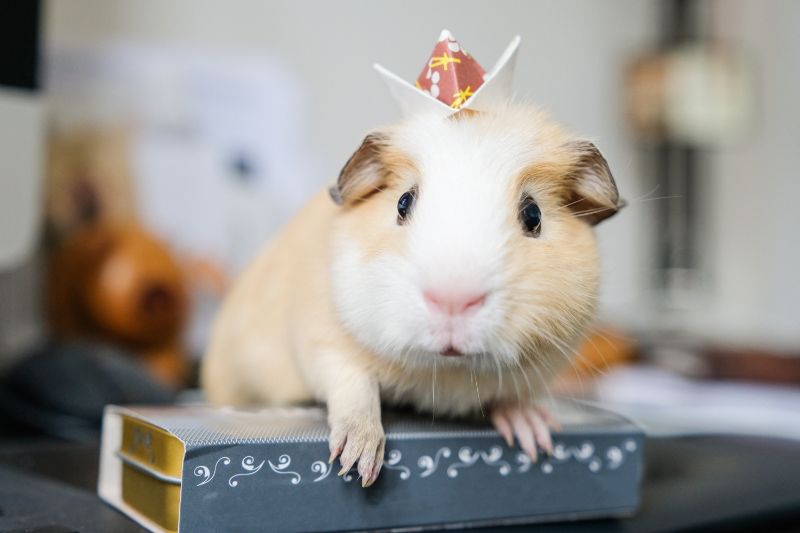 Guinea pigs, unlike some other animals, are unable to vomit in order to clear hairballs from their stomachs and keep their digestive passages clear. As a result, if your guinea pigs groom themselves excessively, there is a risk of gastrointestinal blockage as a result of a hairball forming.

These hairballs grow in size until they become so large that they cause an internal blockage. According to some studies, the removal of these obstructions may necessitate surgical intervention.

Hairballs can be prevented by brushing your guinea pigs on a regular basis. Additionally, making certain that their diet contains a significant amount of hay is important because the fiber in hay is essential for guinea pigs’ intestinal movement.

Guinea pigs express their affection and attachment to one another by grooming one another.

A friendly interaction and necessary procedure for their family groups that takes place either between you and your guinea pigs or between them is described as “socialization.”

The constant grooming and petting segments provide comfort to the guinea pigs and help to maintain the relationship between the two sections.

Younger guinea pigs groom each other in a manner similar to that of their parents. Grooming is also important for maintaining social ranking orders in a group of people who are living together in close quarters.

Guinea pigs licking each others eyes

Guinea pigs are friendly and have strict social hierarchies, which they adhere to. Guinea pig burrows with extensive interconnections are quite accustomed to guinea pigs displaying dominance and subservience.

When subordinate guinea pigs are in front of dominant guinea pigs, they bow their heads and lick the eyes and ears of the submissive ones before continuing on their way.

Guinea pigs are known to express their affection and friendliness by licking each other on the bottom of their feet. Guinea pigs will also lick the faces of their partners in order to attract their attention.

If you notice your guinea pigs licking the inside of their cage, this may be cause for concern. It doesn’t appear to be a big deal until and unless they start nibbling at the bars of the cage. This action is harmful because it has the potential to cause damage to your guinea pigs’ teeth and gums.

Your guinea pigs can lick their cage in the same way that they lick other objects in order to express their affection. They may enjoy the taste of it, licking it, or licking up any leftover food or treats that are left over.

You will notice the following signs in your pet’s behavior when he or she discovers any smell like this:

If you notice your guinea pigs licking the inside of their cage, keep in mind that any cleaning product left on the floor of the enclosure is toxic to them.

Perhaps using a natural cleaner to clean the cage would be a preferable option in this case.

It is not only for cleaning purposes that Guinea pigs will lick your face, but also as an expression of their intense affection for you. Guinea pigs will accept you as the dominant member of their family if you groom their faces and act in a commanding manner.

In order for them to be petted, they must be licking your fingers or holding your hand. This group of guinea pigs may appear to be of a dominant nature, particularly if they force their heads into your palms and demand to be fed.

Allowing your guinea pigs to lick your face while wearing makeup is not recommended.

When you say that applying makeup to your face is risk-free, it does not follow that it will not have any negative consequences for your test subjects should they swallow it.

Precautions are preferable to cure when it comes to your adorable guinea pigs kissing you on the lips.

For Guinea pigs, licking furniture and other items in their environment is on par with groomed humans in terms of affection and affectionate behavior.

It’s possible that this entire behavior was unintentional, or that your pets began licking a wall, a floor, or anything else you were standing on in an attempt to groom you.

It could also include items such as blankets, sofas, and cushions.

When a few specific surfaces behave in this manner, there are some risks involved. Guinea pigs are capable of ingesting carpet fibers, cloth, tablets, and other nondigestible materials.

It becomes more difficult when guinea pigs attempt to eat everything at once and then demonstrate this behavior on a regular basis.

Chemicals used in floor cleaning are also harsh, and any leftovers of these chemicals that are consumed by guinea pigs can result in severe illness in the animals.

It almost certainly indicates that your guinea pigs are attempting to groom you but are unable to distinguish between your skin and clothing.

Your clothes may have a different appearance, but they still have a strong scent that is distinctively yours.

To your guinea pigs, your skin and your clothes appear to be one and the same. You can also include your bed sheets and covers in this category.

Physical damage, parasitic or fungal infections, and other side effects of excessive licking are all possible outcomes.

If you notice that your guinea pigs are licking at a specific spot in particular, make a point of thoroughly inspecting that spot. Are there any cuts, scratches, bruises, or any other types of injuries on your body?

Barbering, which is defined as the pulling and chewing of fur, can develop as a result of uncontrolled licking.

Female pregnant guinea pigs who are getting ready to give birth will exhibit this behavior quite frequently. This behavior can be observed even in guinea pigs that have been spayed.

Skin problems manifest themselves in a variety of ways, one of which is excessive licking. Numerous illnesses and infections could be caused by or have symptoms associated with this problem. These are some examples:

Licking can exacerbate the symptoms of these infections. As a result, it is far preferable to take your guinea pigs to the veterinarian. The treatment will be determined based on a number of medical probabilities.

As guinea pigs seem gentle, they will show a set of destructive behaviors if they get bored. These behaviors cover chewing, biting, fur plucking, excessive eating, and grooming.

When guinea pigs are not stimulated enough they search for ways to use all of their built-up energy. They may get into the habit of licking and grooming too much.

Swallowing their fur excessively can lead to the formation of inner blockage. Be sure that your guinea pigs are well motivated to prevent becoming bored and destructive.

Licking unnecessarily can leave the wet gathering moisture on it. Even half-permanent moisture can cause irritated skin and fur falling. And if not treated wisely, it can turn into a bacterial infection.

Guinea pigs usually lick to show love and fondness. These ‘things’ could be anything like the owner, another guinea pig, objects around the home, and even furniture.

It might sound weird, but your guinea pigs assume your belongings as your substitutes. For instance, they will lick your blanket just to show love via grooming even though they are not grooming you.

Guinea pigs groom themselves by licking, and this will be done many times in a day because they love being clean.

Grooming among guinea pigs is a friendly behavior to show fondness and making relationships.

Dominant guinea pigs lick the eyes and ears of other guinea pigs when they put their heads down to show signs of subservience.

Too much licking is both signals for boredom making guinea pigs destructive and the presence of any health issue.

Is It Worth Getting Pet Insurance For Guinea Pigs?

Why Is My Guinea Pig Always Hungry? (Causes+What To Do)

What Should Guinea Pig Poop Look Like? (Normal & Abnormal Poop)

Guinea Pig Name was founded in 2021 by Litho Duncan. Your guinea pig is the most sensitive pet you could adopt, and it must be taken care of. It needs to be protected from the harmful elements in the environment, the water you drink, and the food you eat. Many have endangered themselves over the years, very few actually get save and treated as a true pet! Understand the importance of taking care your Cavia porcellus Please!